Painting laminate countertops just sounds like one of those horrible ideas. I love those. Painting your old laminate counters makes them look new without having to shell out money for new countertops, so where’s the bad, my friend?

First, I cleaned and lightly sanded the counters. Not a ton of sanding, but enough to remove some of the shininess of the finish.

Next up, I removed all the caulk on the backsplash and around the sink. 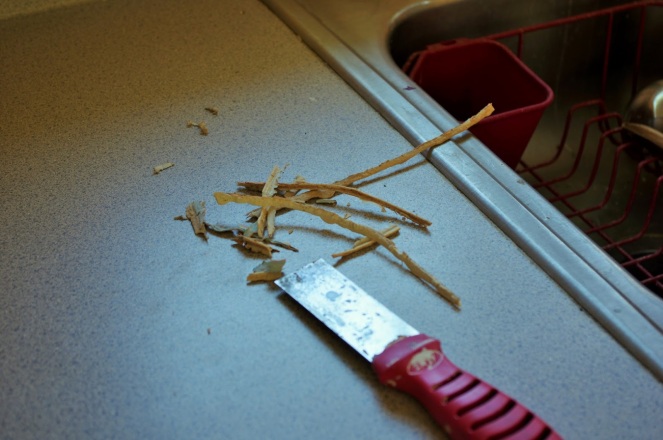 Then the sink was taped off.

For reasons that are completely unknown to me, I forgot to take a picture of the next step, which is the MOST IMPORTANT. 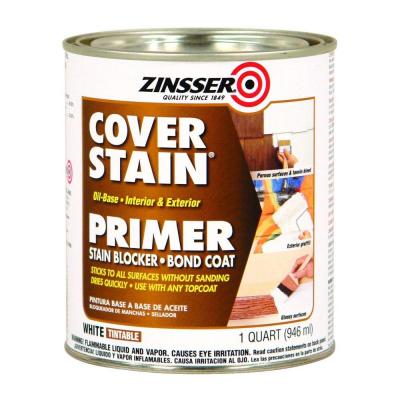 You have to paint the coutertops with oil-based primer. OIL-BASED. I use Zinsser, (affiliate link, yo) and it works like a charm. A stinky, smelly, barbecued-monkey-meat-scented sort of charm.

Seriously, this step has to be done when you can open the windows and air the place out, because this stuff is rank. But necessary. It works to bond the laminate underneath with the paint you’ll be applying on top. Without this stuff, any paint applied will peel off.

After it dried for 24 hours, I moved on.

Paint, mixing cups, and sponges. I didn’t end up using the sponges on top, I used the ones underneath that you can’t see. (Of course.) They were sea sponges, and gave the best result.

The paint is just Apple Barrel acrylic from Walmart. I bought way too much; I think I used 2 large bottles of white, 1/2 a large bottle of black, and a little bit of yellow and metallic gray. That’s it. I also picked up a few countertop sample thingies from a hardware store to give me an idea of the pattern to use. I wanted these counters to be lighter and brighter, and to resemble stone.

Creating a faux-granite or faux-stone look is not necessary. If you try it and fail miserably, you can just apply one color with a roller and call it a day. That was my backup plan – in case of failure, they were going to be painted gray. 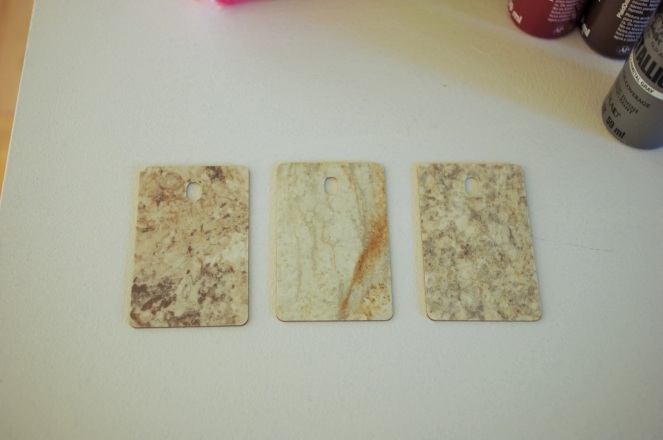 And then you just go for it. I used a sea sponge and literally just sponged paint everywhere. You will be working in layers, so the first bit I put down was a heavy coat of pale gray, just to cover the primer. 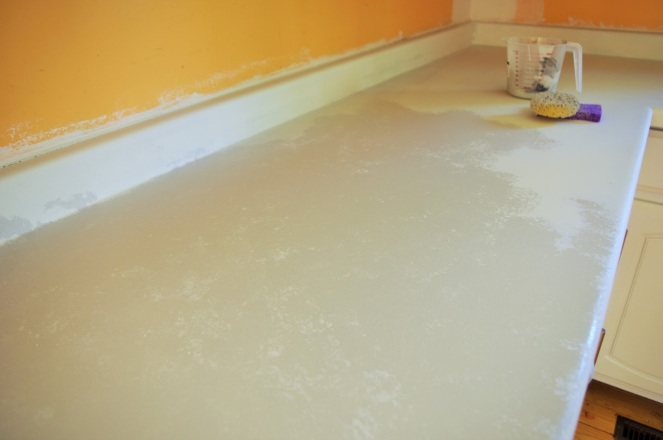 Then I added some darker and lighter splotches. I ended up cutting one of the sponges into smaller pieces, and used those to add color in random patterns.

The paint needs to fully dry between coats, so I ended up doing 2 coats a day. One in the morning, one in the evening. After priming, it took 3 days for me to get the paint where I liked it. I just kept going over and over it, adding varying shades of gray.

When I was finally happy with it, it was time to seal it. I used water-based polycrylic and a roller. All told, I did six coats of polycrylic, and lightly sanded between each one. Though polyurethane is stronger, you don’t want to use it here, because it yellows over time.

I ended up not liking the roller. It was too textured, and left a bumpy finish on the counters. The last two coats were done with a paintbrush, and that helped to smooth them out a little.

The end result? Absolute love. Holy cow. I think they look so much better. And brighter. I finished them on June 4, so it’s been almost two full months.

How have they held up?

They are doing just fine, actually. There is one scratch, I dragged my KitchenAid mixer across one of the counters when the paint was only about a week old, and it left a one-inch scratch in the paint. And that’s it, after two months of regular use. I *do* make an effort to not slide anything heavy across them anymore, though. The mixer now resides on a piece of butcher block.

I don’t expect these to last forever, but I’m very pleased with how they turned out. Any scratches or other problems can be solved with a little sanding, a little paint, and sealing them again.

In the end, this DIY ended up costing, I believe, about $40. Yes, that says forty.

2 thoughts on “How to Paint Laminate Countertops”