For those with no idea what I’m talking about, here’s a quick rundown. Ancestry has a DNA test available. You spit in a tube, mail it out, and they tell you what your ethnicity is. I’ve wanted to take the test for ages. When Ancestry had a sale a few months ago, the husband and I finally splurged. (Regular price is $100 per test, it goes on sale a few times a year for $79.) Is the Ancestry DNA test worth it?

Here’s what I got: 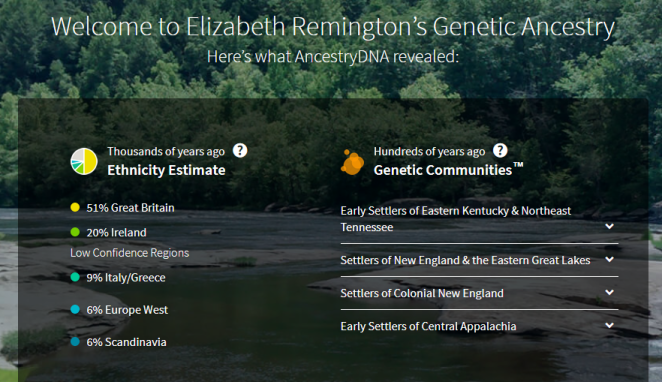 What the hell is that!?

Okay, the top two were expected. But to the best of my knowledge, I have no Italians or Greeks in my family. None. For it to be 9%, it’s a fairly close ancestor. Of whom I have no knowledge. (But it does explain a few of my features and my ability to go from alabaster white to tan without burning.)

The Europe West denotes Germany, France, Belgium, and a few others. Again, no known ancestry there at all. Ditto for Scandinavia.

And Native American? 1%. That’s all. I also have 1% Senegalese and 1% European Jewish.

I find all of this extremely fascinating, but it was a shock. I thought I knew what my ancestry was, and as it turns out, I don’t.

The Genetic Communities are any DNA matches that come from the same area. I have over 1,000 unknown-to-me relatives that popped up on Ancestry, and over 600 of them are from Appalachia. That is not surprising. My family has deep roots in that area.

My husband’s results were even more surprising. His family never told him much about his ancestry, but he was told he was Welsh and Polish. And he is, but he mostly is not. He is mostly from Western Europe. He was told he wasn’t related to other people with his same surname because they were French and he was not, but uh…it looks like he’s mostly French. Possibly German. And Polish and British and Irish, and 1% from both North Africa and the Caucasus. He’s a mishmosh.

So. Is the Ancestry DNA test worth it? You bet your bippy it is. It’s quite a shock to have to adjust your thinking from I know what I am to holy crap I’m Italian, but now I know.

My parents ordered their own DNA tests so we can figure out where in the heck the Italian is coming from. We have a theory, but it’s in its infantile stages.

If you’ve been on the fence about ordering the kit, I say go for it.

2 thoughts on “Is the Ancestry DNA Test Worth It?”