If you’re wondering how to refinish an antique table, the table in question is probably nice. Fancy. Not something as beat up as this. (My love of beat-up furniture runs deep.) 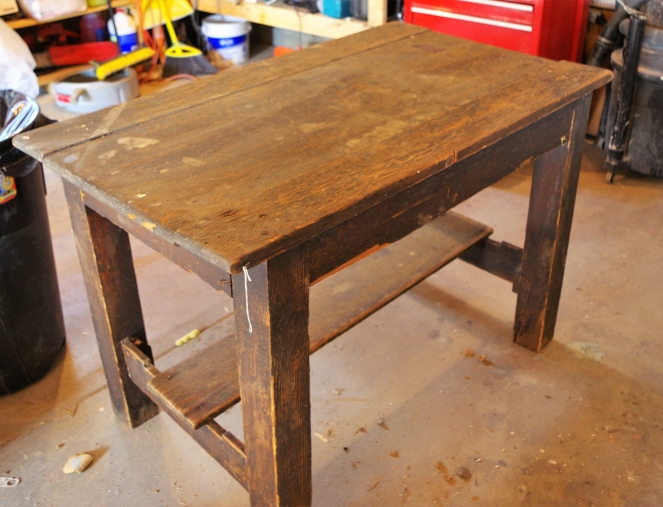 Hoo boy. She was rough.

It was hand-built from some kind of pine, most likely in the 1920s. Phillips head screws were invented in the early ’30s, and this table is held together with flat head screws.

I liked the table because of its beat-up-ed-ness. I didn’t want a table that looked brand new, so we refinished it with that thought in mind. All the old screws and nails and scratches and scars and dents were left intact.

First things first. The tabletop was uneven, so my husband took the supporting boards from underneath off and re-secured them with the old screws and a few new ones, until all the screws gripped the boards and pulled them straight.

The table also wobbled. If I live to be that old, I’ll wobble too. Angled braces in the corners, made from scrap lumber, fixed that problem.

A light sanding with fine sandpaper smoothed out the roughest edges and removed the topmost layer of grit and old varnish.

I flipped the table upside down and polyurethaned the legs first. (Is that a verb? I feel like it should be.) The legs took 3 coats, with a light sanding between each. I used Minwax satin poly and foam brushes.

The top of the table was incredibly dry and took 5 coats.

The table took about a week from start to finish, and she’s pretty. I love it.

And that is how to refinish an antique table while not removing all signs of its age.

At the moment I have no clue what this table will ultimately be used for. Probably a desk. That seems likely.

Go forth and refinish.

2 thoughts on “How to Refinish an Antique Table”