Skip to content
Oh gosh. I haven’t put up a living room remodel post since May. (The last one [Part II] was about painting, and then there was a Sneak Peek post that showed the flooring and the area rug.)
That Sneak Peeks post went up in May and I just realized about 4 minutes ago that I spelled peeks wrong. I used “peaks,” and “sneak peaks” sounds like a way of saying you caught a glimpse of boob.
Anyway. The living room!
It’s taken 2 more months to finish than originally planned mainly for 2 reasons – the husband got a different job, one with longer hours. Which is fantastic, but it leaves a lot less time to put up trim and baseboards. Secondly, he couldn’t move forward until the new bathroom door was ordered. It took us forever to order it, and it turned out to be wrong, the hole for the knob (there’s a joke there) was on the wrong side. (Insert rage face here.) It was a special order and we couldn’t return it, and then it took awhile for the correct door to get here.
But now…she’s done. (Almost. I just have to polyurethane the trim, and that should be done in a week or so.)
The photos in this post aren’t the best, it was dark and dreary outside when I took them. But they’ll do the job. 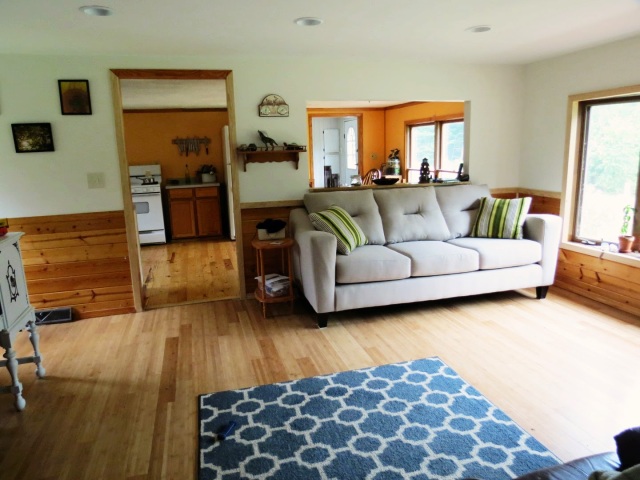 I blogged about finding a mid-century style couch. This isn’t exactly that, but I love it. It’s what I wanted – clean and square, nothing over-stuffed or slouchy looking, and up off the floor on feet. The really great thing about this couch is that it was a closeout…

…and came with a chair. The chair is huge, I can sit in it with my husband. Comfortably, with no one being squished. The couch + the chair were well under the budget I set for a couch, so my frugal soul was (and still is!) pleased.

The living room prior to the remodel had a built-in entertainment center. We ripped it out and put this buffet in its place. It’s a solid walnut number from the early 20th century. I painted it white and black a few years ago and it’s just been sitting ever since, so I’m thrilled to finally have a use for it.
Yes, I painted over walnut. Deal with it. It looked like a big black hole before it was painted, and now it’s lovely. Plus it hides all the cords. 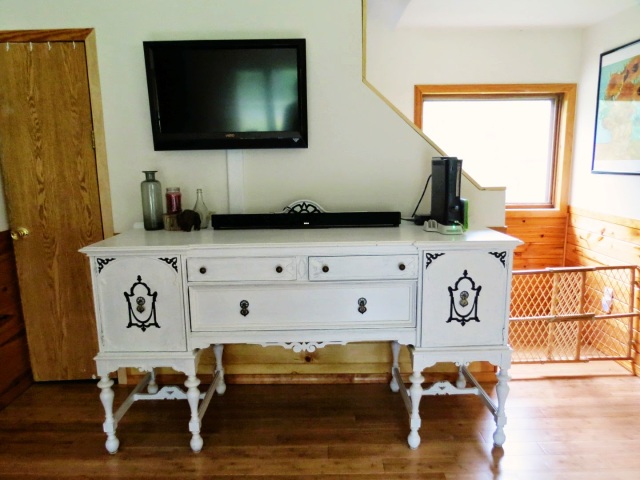 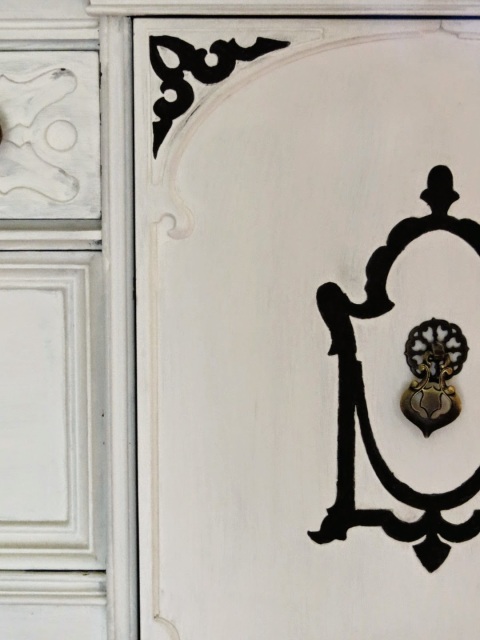 In the interests of trying to keep everything looking tidy and clean, we mounted the TV to the wall and hid the cords under a piece of cord-concealing-trim-stuff. The only things on the buffet are an Xbox, a sound bar, and a few vases and other knickknacks.

The stairwell that leads down to the basement used to be fully enclosed, now it’s open. And now we have movie posters on that wall. (INDY!)

The new bathroom door and the new laundry room door. Having a bifold door on the laundry room is fantastic, by the way. It opens up wider and is generally just fabulous. 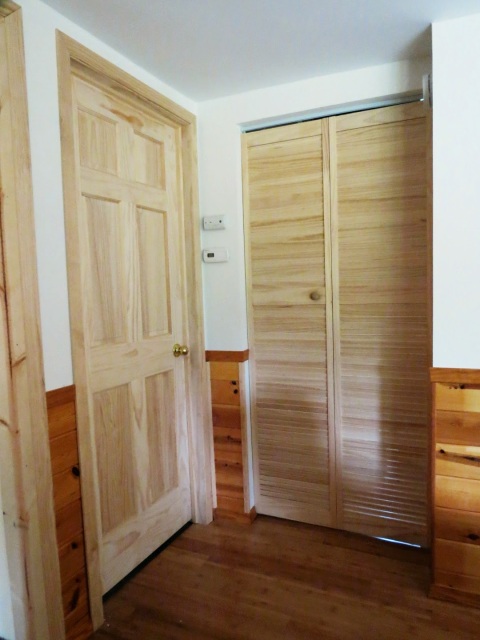 The flooring is bamboo. There was a hump in the living room floor (not structural damage, just built unevenly) and we weren’t sure we could even get hardwood flooring over it, but we prevailed in the end. The flooring is holding up very well, but the dog’s claws do have a tendency to scratch it when she stretches out with all of her (considerable) weight on her paws.
But…it’s done! Yay!
See you later! 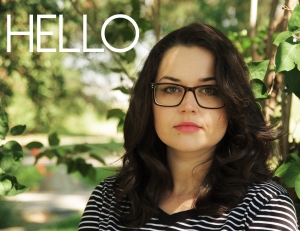