Technically last week’s post about ripping down the ceiling could be considered Part I of this living room remodel, but if we want to be super technical this actually started last year. First, a new staircase. Soon after, the carpeting was ripped out and the subfloor was painted in lieu of installing an actual floor.

Which brings us to the present. Instead of continuing the tradition of finishing the room bit by bit, we’ve done gone the whole hog and are finally finishing the damn thing once and for all. (Easier said than done. This is an older home full of delightful quirks. DELIGHTFUL.) 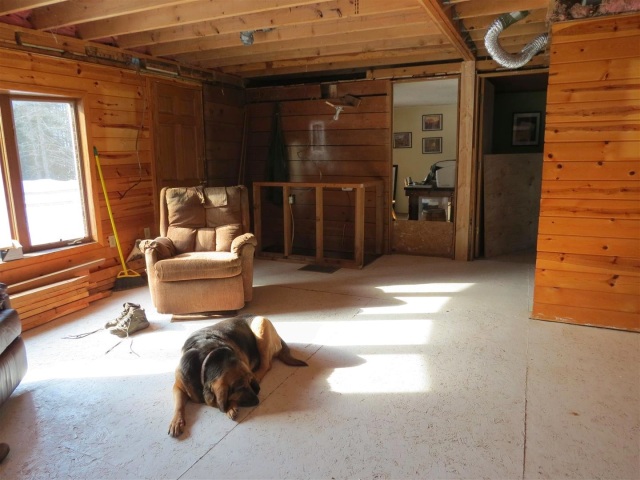 So here’s a fun fact. Not only have I lived in this house, but so have about ninety million other relatives of mine. My paternal grandparents lived in this house and my grandfather did not believe in overhead lighting. Lights in the ceiling were the devil’s tool. That’s what lamps are for.

He also didn’t believe in indoor plumbing, but my grandmother won that round. GO GRANDMA.

My entire life….no lights in the living room ceiling. None.

LET THERE BE LIGHT. (Bungee cords optional.) We weren’t sure exactly where to put the lights and ended up moving them around quite a bit until we were happy with them. Bungee cords are wonderful temporary light fixture holders.

The entire front wall of the laundry room was crooked. And I don’t mean a little off, I mean that mother was crooked. It’s not a structural fault, it’s literally just the way it was built. (DELIGHTFUL. QUIRKS.) Now there’s a new straight wall in its place.

There was some other, less interesting stuff as well. Replacing old insulation with newer, tearing out a built-in entertainment center, doing general reinforcing of old beams and joists, replacing a few lengths of old wiring, and shopping for carbon monoxide alarms (fun!). Then we put up drywall on the ceiling. 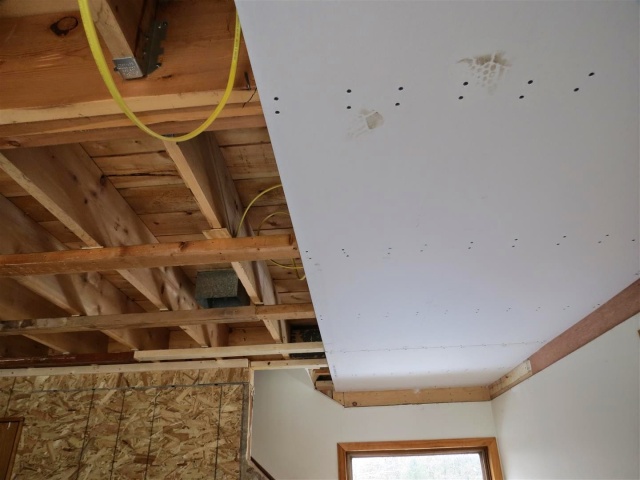 On The Scale of Fun, from Playing with Puppies to Listening to David Hasselhoff Sing, this was up there with the Hoff. No fun whatsoever. I didn’t get a sheet of drywall dropped on my head so I can’t complain too much.

And that concludes Part I. Part II is coming up, and includes dust and more dust.